For me long hair was a shield, something I’d put between me and the rest of world. 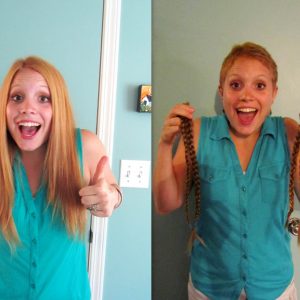 The first thing I did when I got home from my first semester of college was get a haircut. When the hairdresser put my waist length hair in a ponytail I started to feel nervous. What if I hated it? What if it looks terrible? What if… But then he cut off more than a foot of my hair and it was suddenly a jagged went log that was a little shorter than shoulder length. I smiled. I love it, I thought, I already love it.

I’ve never been a girl you could call high maintenance. I mean sure I like looking nice, but at the end of the day, I’d choose a look that looked good and was easy than one that looked great and was harder for my everyday hair style.

Throughout middle school and high school I had long hair. Like really long. It would almost always fall somewhere between mid back to waist length.

My classmates would comment on how beautiful it was and by high school it was dubbed ‘mermaid hair’. It was long, wavy, and dark and I loved it.

But it was one of the only things I loved about the way I looked. In fact, I would often use it to hide behind. It distracted people from the acne on my face and the parts of myself I didn’t like. Even though I loved being on the cross country and track teams I hated when, before practice every day, I would have to put my hair into a ponytail and take off my dark hipster glasses, something else I used to distract from my face.

My insecurities didn’t end with my acne. Obviously, I’m not the only girl in the world who struggles with liking the way their bodies look. And even though I’d always been the healthy, average, recommended weight for someone of my height and age, I was still able to find things one my body that I didn’t like. Unfortunately, I finally accepted that that was just a fact of growing up and maybe even life in general.

That is until senior year.

For me, senior year was great. I was in the AP lit class, I was writing articles in the school paper that people were actually reading and talking to me about. I was in a great relationship and by this time I had already committed to a university. I had decided to do something about my acne and was taking some acne medication that was actually working. I was winning awards for my writing and had decided to pursue it as some sort of career.

My writing was really the turning point in all of this. I had been a relatively quiet person and I had enjoyed writing since I learned how to hold a pencil. Then I learned about journalism and I found my voice. That’s how I could communicate with the world.

Everything was falling into place. After having so much anxiety and being so afraid of things like SAT scores, the AP lit test, college applications and acceptances it was all coming together so beautifully. All my hard work had been worth it and it was a pretty satisfying.

It wasn’t immediate, but because of all this good mojo I had going for me, my self-esteem had risen. It may sound shallow but it makes sense. When things are going well for you, you feel better. At least that’s how it was for me.

Then I went to college. I had the normal worries when I was leaving home for college. What if I don’t make any friends? What if it’s too hard? What if they hate my writing? What if my writing isn’t actually that good?

Fast forward four months and I had just finished my first semester of college. It hadn’t been as hard as I thought it would be in pretty much every aspect. Academically I was doing wonderfully (Dean’s list woot-woot) and socially I was doing fantastically (clubs, clubs, and more clubs). I’m not saying it was a cakewalk either. It was hard, harder than high school, but in no way was it impossible. I was coming home with a new confidence and when I looked back on my insecurities at the beginning on the year I knew what I had to do.

I’d always considered cutting my hair short and now I was going to do it.

Cutting my hair took guts, but it paid off. People loved my short hair and I was able to donate about a foot. I was hoping I’d like it, and I did, but I never expected to feel as though a huge weight was lifted off my shoulders. I’d only realized I’d grown out of my long hair once I’d cut it.

For me long hair was a shield, something I’d put between me and the rest of world. Something I’d let myself be defined as. And while the quiet girl with long beautiful hair is never a bad thing to be it wasn’t who I was anymore. I had a voice and when I found it I was not allowing myself to loose it.